Vagrant on Fedora with libvirt

Apparently lots of people are using Vagrant these days, so I figured I’d try it out. I wanted to get it working on Fedora, and without Virtualbox. This is an intro article on Vagrant, and what I’ve done. I did this on Fedora 19. Feel free to suggest improvements.

Vagrant is a tool that easily provisions virtual machines, and then kicks off a configuration management deployment like Puppet. It’s often used for development. I’m planning on using it to test some Puppet-Gluster managed GlusterFS clusters.

You should already have the base libvirt/QEMU packages already installed (if they’re not already present) and be comfortable with basic virtual machine concepts. If not, come back when you’re ready.

Fedora 20 was supposed to include Vagrant, but I don’t think this happened. In the meantime, I installed the latest x86_64 RPM from the Vagrant download page.

EDIT: Please use version 1.3.5 only! The 1.4 series breaks compatibility with a lot of the necessary plugins. You might have success with different versions, but I have not tested them yet.

You’ll probably need some dependencies for the next few steps. Ensure they’re present:

The virsh and virt-manager tools are especially helpful additions. Install those too.

Vagrant has a concept of default “boxes”. These are pre-built images that you download, and use as base images for the virtual machines that you’ll be building. Unfortunately, they are hypervisor specific, and the most commonly available images have been built for Virtualbox. Yuck! To get around this limitation, there is an easy solution.

EDIT: Note that there is a bug on Fedora 20 that breaks mutate! Feel free to skip over the mutate steps below on Fedora, and use this image instead. You can install it with:

You’ll have to replace the precise32 name in the below Vagrantfile with centos-6.

Now download an incompatible box. We’ll use the well-known example:

Finally, convert the box so that it’s libvirt compatible:

This plugin can also convert to KVM friendly boxes.

You’ll need to make a working directory for Vagrant and initialize it:

I initially tried getting this working with the vagrant-kvm plugin that Fedora 20 will eventually include, but I did not succeed. Instead, I used the vagrant-libvirt plugin:

EDIT: I forgot to mention that you’ll need to specify the --provider argument when running vagrant commands. I wrote about how to do this in my second article. You can use --provider=libvirt for each command or include the:

line in your ~/.bashrc file.

I have found a number of issues with it, but I’ll show you which magic knobs I’ve used so that you can replicate my setup. Let me show you my Vagrantfile:

The most common commands you’ll need are:

I won’t go into further details here, because this information is well documented.

At this point you’re probably getting annoyed by having to repeatedly type your password to interact with your VM through libvirt. You’re probably seeing a dialog like this: 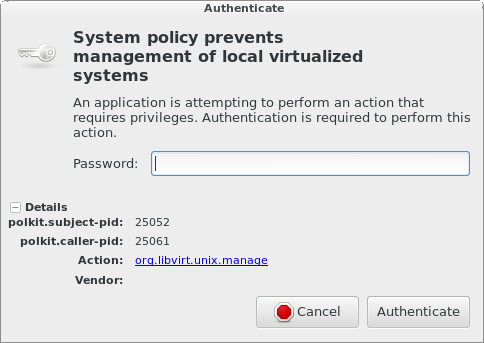 This should look familiar if you’ve used virt-manager before. When you open virt-manager, and it tries to connect to qemu:///system, PolicyKit does the right thing and ensures that you’re allowed to get access to the resource first! The annoying part is that you get repeatedly prompted when you’re using Vagrant, because it is constantly opening up and closing new connections. If you’re comfortable allowing this permanently, you can add a policy file:

and then shouldn’t experience any more prompts when you try to manage libvirt! You’ll obviously want to replace the james string with whatever user account you’re using. For more information on the format of this file, and to learn other ways to do this read the pkla documentation.

If you want to avoid PolicyKit, you can connect to libvirtd over SSH, however I don’t have sshd running on my laptop, and I wanted to connect directly. The default vagrant-libvirt example demonstrates this method.

Provisioning machines without configuration management wouldn’t be very useful. Thankfully, Vagrant integrates nicely with Puppet. The documentation on this is fairly straightforward, so I won’t cover this part. I show a simple Puppet deployment in my Vagrantfile above, but a more complex setup involving puppet agent and puppetmasterd is possible too.

Hopefully this makes it easier for you to hack in GNU/Linux land. I look forward to seeing this supported natively in Fedora, but until then, hopefully I’ve helped out with the heavy lifting.