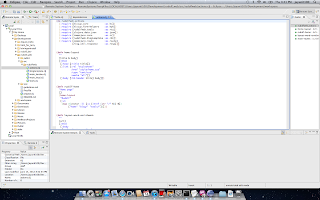 The big, bad Eclipse is great for whipping a massive java source tree into shape, fast.  But for Clojure – its a different, more thoughtful development idiom.  You don’t need to browse complex type hierarchies and fold 1000s of lines of code every other second.  Debuggers are, although available, not usually necessary due to the functional nature of things : problems can be directly isolated.


Thus – I don’t want heavyweight java project management in a dynamic language environment, and I don’t any need refactoring fanciness.  Here is how to transform Eclipse into a super-productive, lightweight IDE for zen-style Clojure development:

What about other plugins ?
Well… lets see….