GlusterFS Snapshots And Their Prerequisites

Gluster
Long time, no see huh!!! This post has been pending on my part for a while now, partly because I was busy and partly because I am that lazy. But it’s a fairly important post as it talks about snapshotting the GlusterFS volumes. So what are these snapshots and why are they so darn important. Let’s find out…
Wikipedia says, ‘a snapshot is the state of a system at a particular point in time‘. In filesystems specifically, a snapshot is a ‘backup’ (a read only copy of the data set frozen at a point in time). Obviously, it’s not a full backup of the entire dataset, but it’s a backup nonetheless, which makes it pretty important. Now moving on to GlusterFS snapshots. GlusterFS snapshots, are point-in-time, read-only, crash consistent copies, of GlusterFS volumes. They are also online snapshots, and hence the volume and it’s data continue to be available to the clients, while the snapshot is being taken.
GlusterFS snapshots are thinly provisioned LVM based snapshots, and hence they have certain pre-requisites. A quick look at the product documentation tells us what those pre-requisites. For a GlusterFS volume, to be able to support snapshots, it needs to meet the following pre-requisites:
Now that I have laid out the rules above, let me give you their origin story as well. As in, how do the GlusterFS snapshots internally enable you to take a crash-consistent backup using thinly-provisioned LVM in a space efficient manner. We start by having a look at a GlusterFS volume, whose bricks are on independent, thinly-provisioned LVMs. 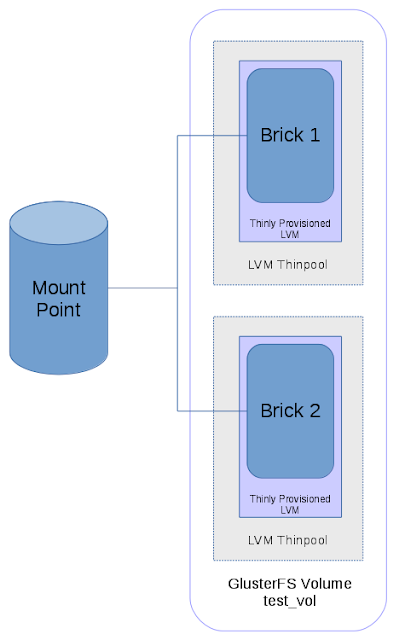 In the above diagram, we can see that GlusterFS volume test_vol comprises of two bricks, Brick1 and Brick2. Both the bricks are mounted on independent, thinly-provisioned LVMs. When the volume is mounted, the client process maintains a connection to both the bricks. This is as much summary of GlusterFS volumes, as is needed for this post. A GlusterFS snapshot, is also internally a GlusterFS volume with the exception that, it is a read-only volume and it is treated differently than a regular volume in certain aspects.
When we take a snapshot (say snap1) of the GlusterFS volume test_vol, following set of things happen in the background: 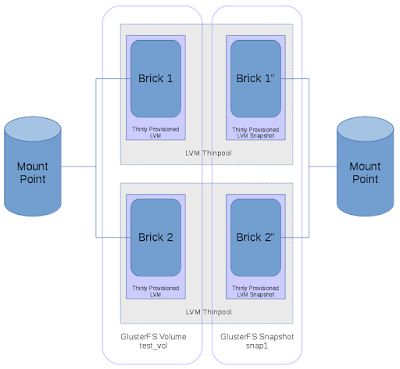 As can be seen in the above diagram, the snapshot creation process has created a LVM snapshot for each LVM, and these snapshots lie in the same thinpool as the LVM. Then we carve bricks (Brick1″ and Brick2″) out of these snapshots, and create a snapshot volume called snap1.

This snapshot, snap1 is a read-only snapshot volume which can be:

All these functionalities will be discussed in future posts, starting with the command line tools to create, delete and restore GlusterFS snapshots.